Ican carbon fat bike. So they are made from carbon fiber. Outlook is awesome, clear larque on the top. Underneath the larque you can see the carbon fibre, I like that. What are the benefits of carbon fiber? In my opinion is a rollability, just that!

The weight of the previously used Sun ringle mulefut80sl wheels they dropped about 800 grams weight. Almost a kilo, that's pretty much. I don't think i've got more any speed on trails for these.
Any kind of nature has become driven and I have been using two sizes of tyres on these, Schwalbe jumbo jim snakeskin 4.4" and most recently Schwalbe jumbo jim snakeskin 4.0".

The smaller one is better, I think. It's a little bit lighter and it's not so big in the air volume. They are fitted as tubeless, i use about 1,4 desiliters stans notubes tyre sealant on a each tyre. Tubeless is better than innertube, because of fatbike tubes weight about 600 grams apiece.

That's a lot. Complete wheels ready for use weight about 2,5 kg front and 3 kg rear. A few scratches have come to the wheels of the time, but they don't mind me. They are made for use so let's go and hit the trails again. 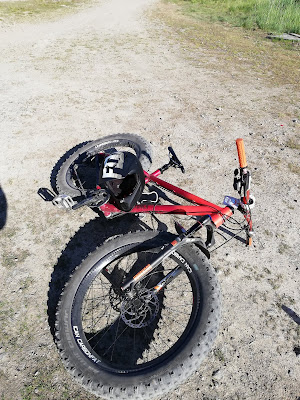 Bearings, hubs, tires and other components? How do they last?  That we will see in future, but for now my opinion is that they have last in this short time really well, even in a bike park for fun. Not for racing in the bike park because fatbike is not made for that kind of use. But there I broke the rear tyre, that was firts time when this kind of accident happens.

That's mountain biking life, you will never know what's going to happen and where. I've been totally happy with the quality of the icancycling carbon fat rims, they are quite hard on hand, but there's no need for straightening as long as the spoke tension is correct.

They are still going strong after use by two people, first with my friend about 3000km and now I have ridden them about 3000km also. The wheels are made in the bike store at Finland with halo hubs and dtswiss competition spokes. After 3500km I had to renew the old Halo rear hub once it started to break down from freehub.

I replaced it to the Dtswiss big ride 350 with new Dtswiss competition spokes and brass nipples, as it has been ridden now a year without any problems. That's good because there are big problems with cheaper rearhubs durability. Do not never ever buy cheap ones! Even Halo rear hub unless it's not the cheap one! I recommend dtswiss or industry nine rear hubs. Halo front hub is still fine after 6000km. Front hub don't have so much strain than rear hub, so it doesn't have so big matter what is in there. 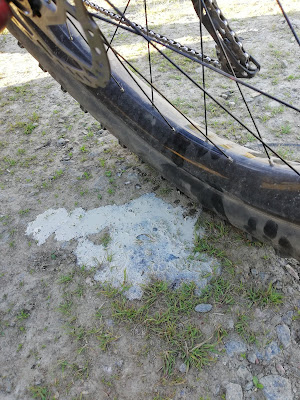 And a rider passion to MTB

At 3 years ago I really started mountain biking again after about 10 years of the brake. At first, a had a White bikes hardtail with 27.5” tyres, it had drivetrain 3x10, but was changed to 1x10. After a year of using it, I sold that. My friend has a rental company, where I rented a fatbike couple times and that was enough for me to have my own fat and then I bought my first fatbike.

That was Silverback scoop double 2017, that bike I had almost year and then I bought a new model year from the same manufacturer. Silverback scoops double 2018. Outstanding looks on both of them. The older one was mounted in factory 2x10 drivetrain what i changed to 1x10. Newer bike came from factory 2x11 and was changed straight to 1x11.

Front chainring has been same in both bikes, absolute black narrow wide oval 32 teeth. Rear cassette on new is Shimano slx 11-42, old one had an 11-40 Sunrace cassette. Both bikes came from factory quite good Shimano parts, wheels where sun ringle mulefut80sl's and tyres were Vee tire Bulldozer's, those tyres I didn't like. Too heavy and too much selfsteering.

First I replaced them to Maxxis colossus 4.8”, quite cood on snow trails, but allso quite heavy. Then at spring i bought Schwalbe jumbo jim's 4.4”. First remarkable thing about them was rollability and no selfstering at all. Wow. With Ican carbon wheels I also had in front a Maxxis minion fbf 4.0”, ok tyre but the little bit too heavy.

So the decision was to put Schwalbe jumbo jim 4.0” on both wheels. They weight about 1.1 kg apiece. In time I made some decision to buy little bit better brakes. Shimano slx brake rotors and Shimano deore M615 disc brakes, they have been really good to use and powerfull. After a year of use, brake pads have worn out, so i had to replace them to new Shimano G01S pads. All good for now. Waiting for new future trails and trips. Nice! 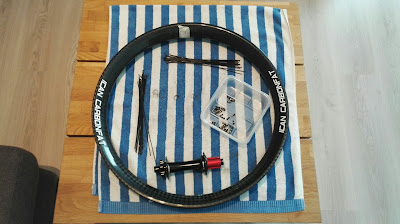